Our adaptive zeolite rotor system is our most popular purification technology. It is an effective and long-term solution that couples a consistently high cleaning rate and low operating costs. This system is primarily developed for printing and painting processes.

The zeolite rotor is a wheel made of a fiberglass matrix impregnated with a layer of zeolite.

The rotor housing is designed so that the wheel is divided into separate sectors. The VOC-rich process airflow travels through the largest sector (approx. 75% of the surface), where the VOCs are adsorbed by the zeolite. When the wheel rotates slowly (1-3 rph), the zeolite with VOCs enters the next sector, known as the regeneration sector.

A hot airflow travels in the opposite direction to the process airflow, and heat up the zeolite so that the VOCs follow along in the air stream.

The regeneration flow is much smaller than the process airflow, and the concentration becomes 10–25 times higher. As a result, a smaller incineration system can be used for the destruction of the VOCs.

In the third sector, the rotor is cooled to prepare it for absorption when it enters the large sector again. The outbound cooling airflow passes through a heat exchanger, where it is heated further and used as regeneration flow.

The concentrated air is the directed to a catalyst for incineration. Catalytic recuperative incineration is preferable due to its ability to handle large variations in concentration and airflow, in addition to having short start and stop times.

The up-concentration of VOCs in our two-step system keeps operating costs down due to a more cost-effective incineration. The rotor’s low pressure drop keeps the energy costs low in comparison to other cleantech.

The system’s adaptability also keeps the operating costs down in highly varied production conditions. The majority of our customers also choose maximize cost-efficiency by reusing the surplus heat to warm their facilities and/or in their drying process.

Our oldest zeolite rotor systems are still operational after more than 25 years. Designed in accordance with Swedish cleantech engineering and constructed at our facility in the southern region of Sweden.

With our transparent service agreements, customers get air purification with no hassle.

We are with you from design, through installation to hassle-free maintenance.

Diffuse emissions are a common problem in the print and packaging industry as it is difficult to completely encapsulate a printing press.

The zeolite rotor’s ability to economically handle a larger exhaust airflow allows you to catch more of the VOCs in and around the printing press, which lowers the risk of diffuse emissions.

Improved extraction around the printing press not only results in fewer diffuse emissions, but also a better work environment for staff.

Our customers have reduced their diffuse emissions compared to their previous air purification solutions. 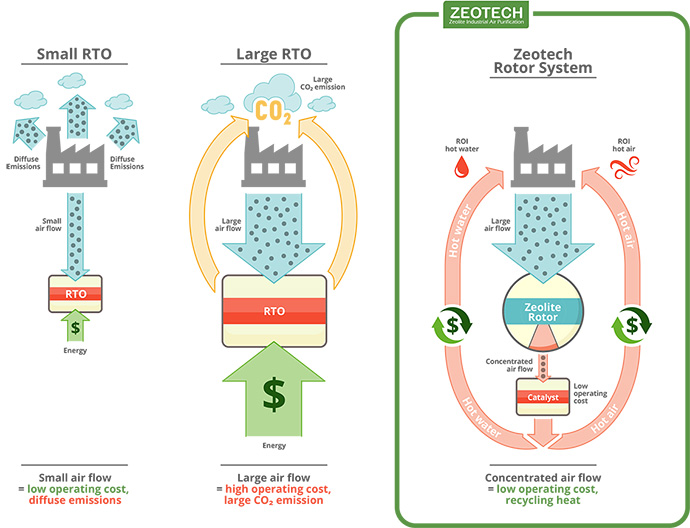 Our zeolite rotor enables our customers to reuse the surplus heat in their own production, as well as to heat their facilities. This further reduces operating costs, often resulting in a ROI within just a few years.

The effective concentration of VOCs and the catalytic incineration in our system is what creates the best possible conditions for heat recycling.

Heating of facilities
By using an integrated water battery, we are able to deliver

thermal energy for heating of facilities. Some of our customers have lowered their heating costs by more than 80 %. This significantly reduces the total operating costs for the production.

One of the primary advantages of our zeolite rotor system is the unique control features which allows the system to handle a large range of VOC quantities from the production.

A flexible system that minimizes downtime
Varying production conditions, such as in the graphic industry where order changes and the use of multiple prints are frequent, also results in varying concentrations of VOCs in the process air requiring purification.

Our control system can handle a wider range of variations than most other cleantech solutions, thereby minimizing downtime.

Our zeolite rotor system keeps operating costs down even at low production volumes. Most other cleantech systems force you to adapt the system to the highest possible concentration of VOCs– which also creates significant operational costs.

We can help you map out your purification needs and then suggest a customized purification solution which is sure to provide low operating costs. We will give you concrete suggestions for the best available cleantech and investigate whether you can recycle energy from the system, which in turn would lower your total operating costs even further.

Our staff will deliver the equipment to you on time and will remain onsite until the installation has been completed. We will start up the equipment and educate your staff in its usage. We will not depart until everyone involved are satisfied.

Our service agreement includes an annual service visit. We will also continuously monitor the purification system through our remote connection. This allows us to monitor the system and ensure that it is operating at peak capacity with the lowest possible operating cost. We also offer servicing of purification systems that initially have not been supplied/installed by us.

How much can Zeotech lower your costs?